Without Grannies No Revolution | travel writing 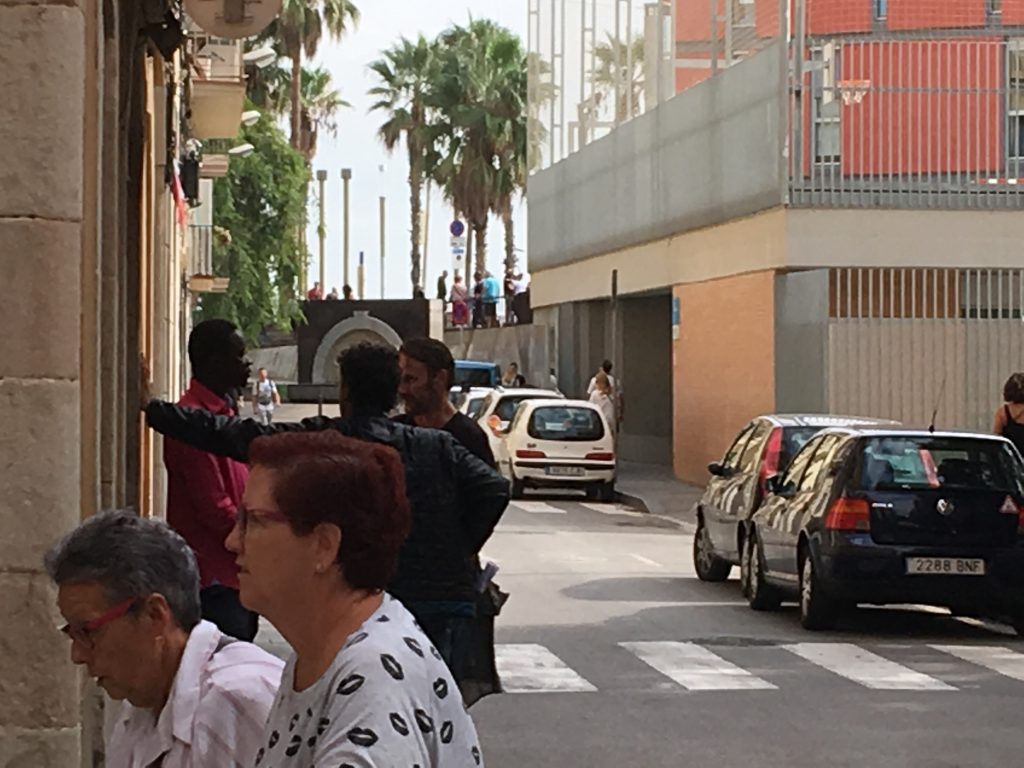 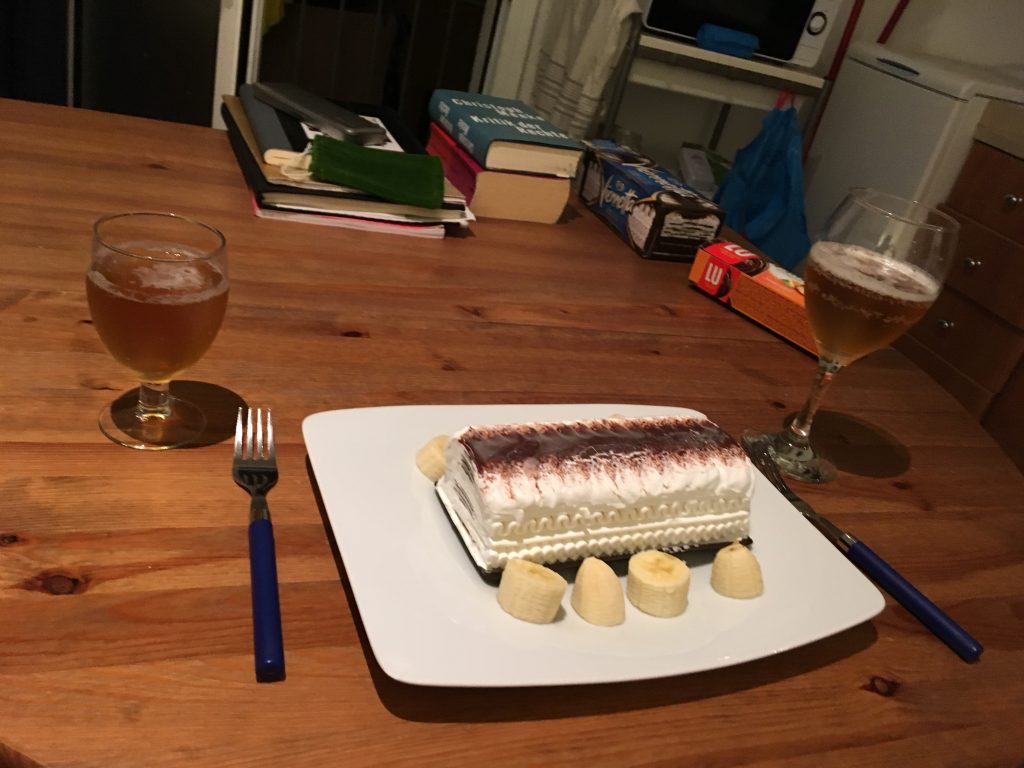 In fact I’m already not in Barcelona anymore. I’m on an – as ever delayed – Ryanair plane heading to Stansted. The passenger to my right just had to repeat seven times “cranberry and chocolate brownie” until he was reluctantly offered what he attempted to buy. It’s quite ironic how one can be force-fed with advertisement, constantly treated as good-for-nothing-but-consuming, and yet struggle to have a rather basic need commercially satisfied. It reminds me of how I felt almost constantly in New York and no doubt that regime makes sense according to some late-capitalist logic of austerity as activation… All this to say that I am rather proud I was organized enough this morning to go past the wonderful Baluard bakery and buy a dried-tomato-baguette. Never mind that it has now leaked lots of olive oil into my copy of Walled States, Waning Sovereignty. I should really be reading rather than write, not just Brown but also Lenin and Menke (what a blend!), to prepare my upcoming talk in Frankfurt.

Yesterday evening we went to the huge march with Manda. She joked that we were her international observers and we appreciated having a local guide. In turn we gave her some basic affinity group instructions – she is new to the art of protesting. We walked through the traffic-less city and Manda, with her knack for organization, really liked the care for coordination. Don’t step away from the group! What do we do if we lose each other? Have we got tissues, bananas, still water? How do we communicate discomfort and danger? Any idiosyncrasies? I mentioned my orientation-incapacity. And that I usually started crying on good demos, something that should precisely not be taken as a sign of discomfort.

In my mind, probably hardwired from Berlinian 1st-of-May-rituals, the 6 o’ clock demo is bound to get a bit rough. But in fact everything was so quiet that I wondered whether the term demonstration even applied. The organizers themselves mostly preferred the Catalan word “concentratio”. Manda said that there was a huge emphasis on non-violence, and had been for a long time, in the Catalan independence movement. She perceived even the few instances of slogan-chanting as too aggressive. I was most in awe of the traffic shut-down. Not only the route, but the whole central area of the city was without cars. Never mind the “beach under the asphalt” if you can walk in the middle of four-lane-avenues, in between the beach and the city center! Apparently this arrangement wasn’t a big deal, though, but the standard set-up for the annual Catalan festivities. They are held on September 11th to commemorate the defeat and Bourbon take-over of the region in 1714.

There literally were no police. Only late in the evening, already on our way home, did I notice a group of Catalan police leaning against their police bus. They seemed positioned strategically opposite a gigantic dessous-shop-advertisement and didn’t do anything other than staring at it in a rather bored fashion. However, there was great nervousness about possible attempts of the Spanish police to infiltrate the crowd and cause uproar. Someone had posted a photo of a large group of them leaving their ominous boat in plain clothes. (Though I guess they might also do that if all they intended was drinking mojito in one of the few beach bars not on strike.)

The turn-out was massive. It was hard to distinguish between the actual demonstration and the streets leading up to it, also packed with people. 700 000, even according to the official count. Very few home-made banners. “Elect a clown, expect a circus” was a nice one. We cheered for a pro-immigration one, demanding for Catalonia to be an anti-racist polity. One repeated slogan was about neither forgetting nor forgiving. Manda didn’t like it but only said that that one was “very old”. There was a small feminist block with purple flags. The co-organizing Catalan unions were leading the march. Of the Spanish unions only the anarcho-syndicalists. By far the most prominent graphic was the faceless head with the mouth crossed out and “democracia” written underneath. I guess it was meant as a demand to end the contradiction, but it could also be read as a denunciation of the concept altogether.

One of the most endearing aspects was, again, the intergenerationality (as heterogenerational as it may be). Not only were there many older people, there was also a new slogan in circulation: “Sense iaies no hi ha revolució!” – “Without grannies no revolution!”. That one I want to remember.

I tried to learn from Manda what the different flags stood for. The omnipresent Catalan one, red and yellow stripes with the star in a blue triangle, marks the independentism. There also was the one without the blue, with the red star on yellow ground, which stood for the socialist independence movement. I wondered, though, whether some people simply carried it because the corner shops had sold out the standard one. There also was the anti-monarchical yellow-red-purple banner of the Spanish republic. We even saw someone who had the cheek to bring his Spanish flag. He was entirely left in peace by all bystanders.

Manda suggested that the central government anyway knew it had lost Catalonia long ago and that they were now playing the escalation ticket in order to call general elections and win an absolute majority. That made a lot of sense of otherwise entirely absurd behaviour. I would actually take a bet that they could have risked changing the constitution and have a proper referendum. It didn’t feel to me like there was a really sustained majority behind independence, especially when I compare it to the atmosphere in pre-referendum Scotland. So either the tactic behind the violence – which so clearly strengthens the separatists – is indeed about something else, or Wendy Brown is right and sovereignty remains a much more theological concept than us democrats want to believe. Punishable blasphemy starts not with the act of sedition, but at the mere thought of it.

I couldn’t help a mild melancholia about the fact that such a mobilization occurred, yet not about the end of all exploitation, but just for minor vs. major nationalism. Nevertheless – between this crowd and Rajoy’s central government, it was easy enough to tell left from right. We bumped into a colleague of Manda and Aurélie’s. She was there with a young man who wore his hair in a French braid like the one I usually make for Jacob. She spoke about her neighbourhood, a sleeping town at the outskirts, mostly populated by workers migrated there from the South of Spain. She said they had no Cassolada there in the evenings. I wondered whether I had been there when I mistakenly went to the final destination of the bus on the first day.

By the end of it all, not one shop-window was broken.

Having dragged our tired legs up the narrow flight of stairs again, Aurélie and me indulged in a dinner composed of beer, bananas and an entire pack of Vienetta ice-cream. For 9 o’clock, a speech of the king was announced. The Barceloneta very effectively drowned it in an additional Cassolada.