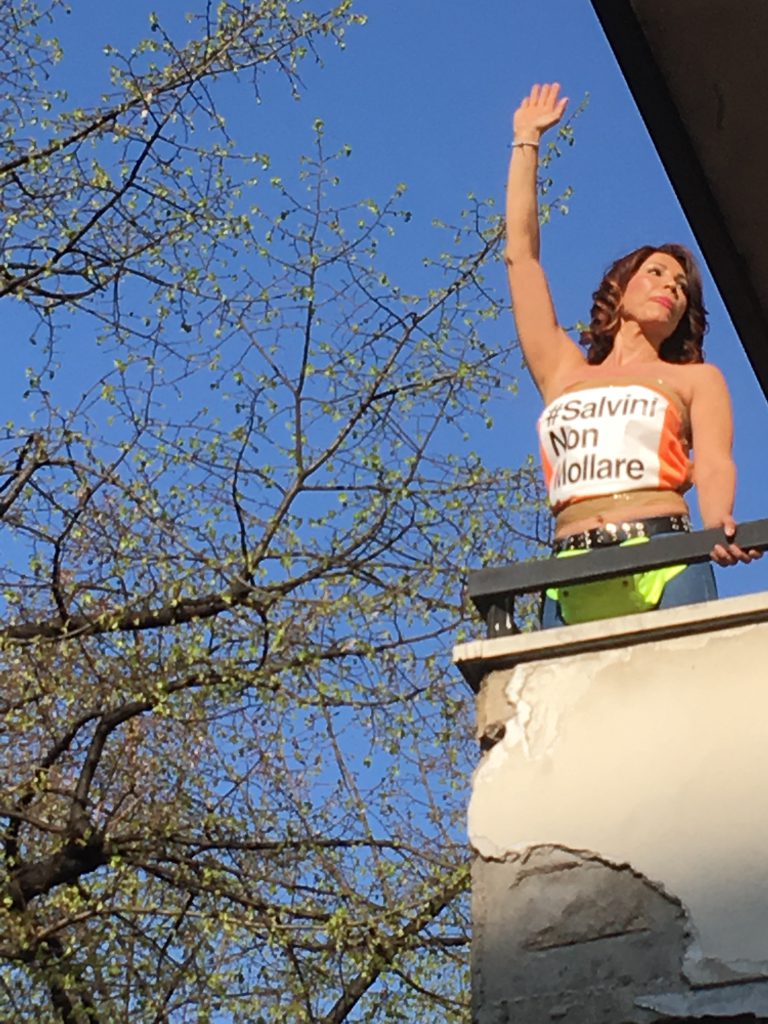 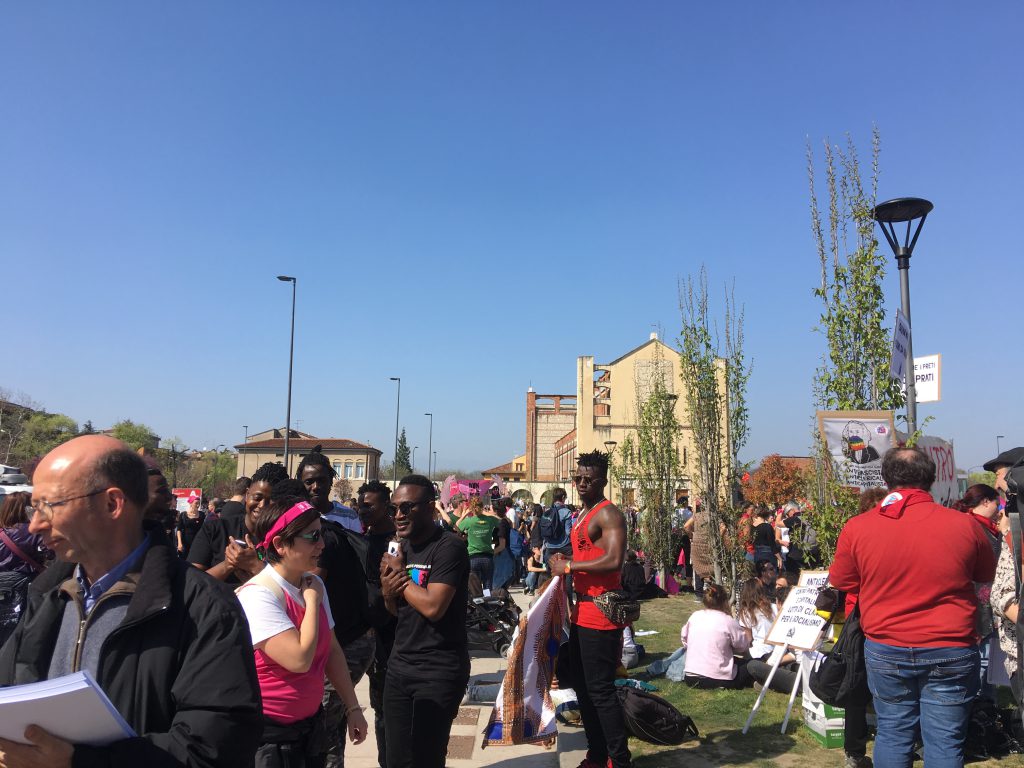 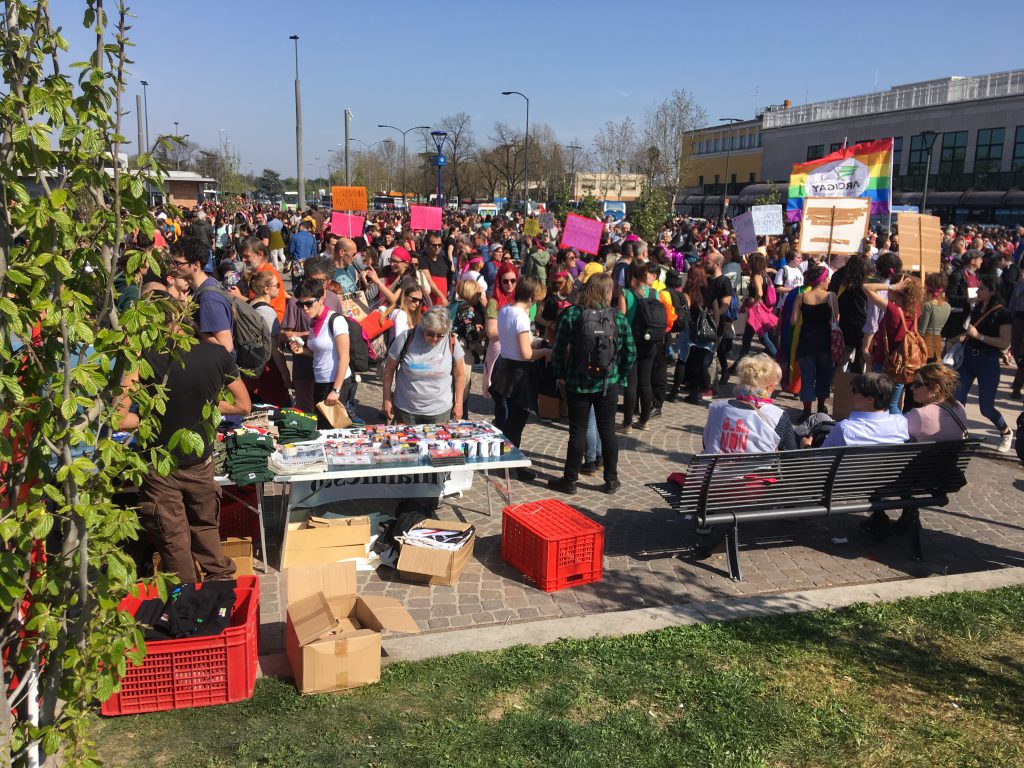 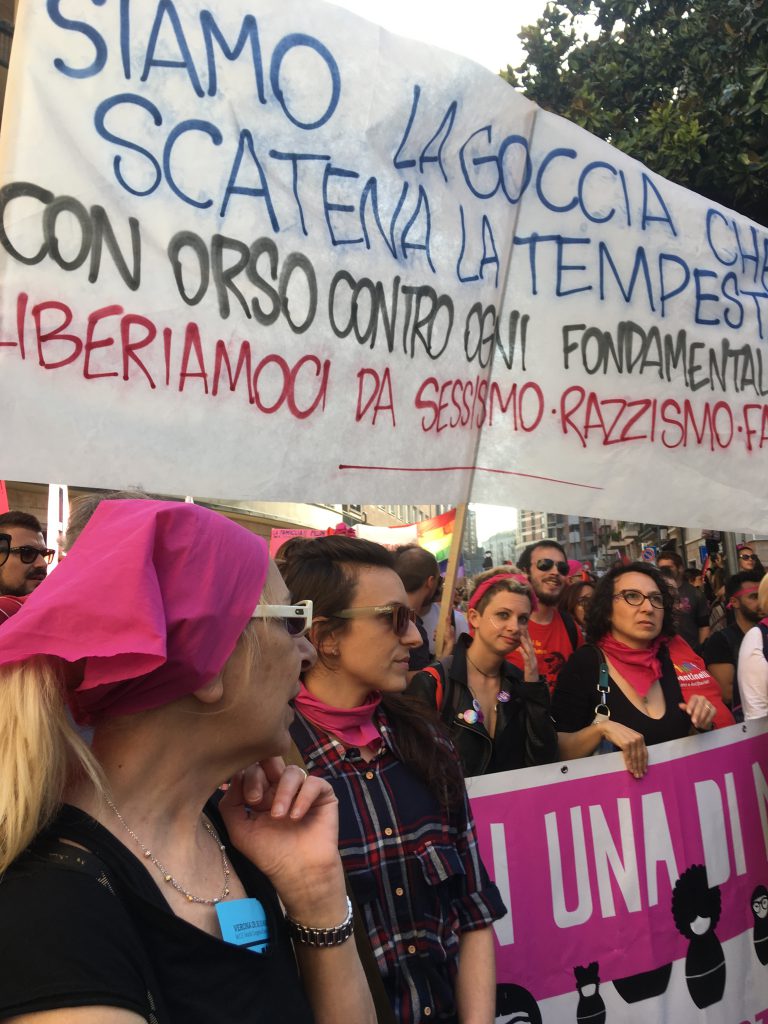 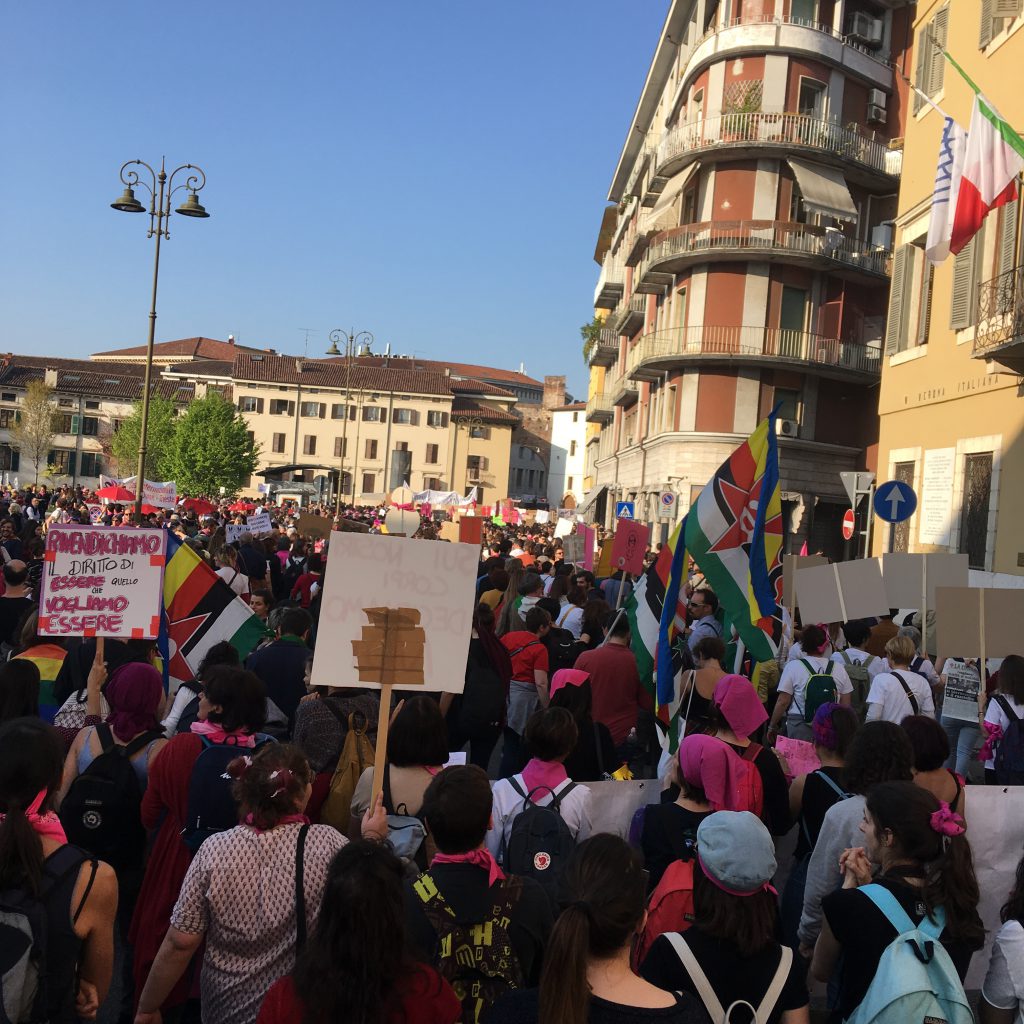 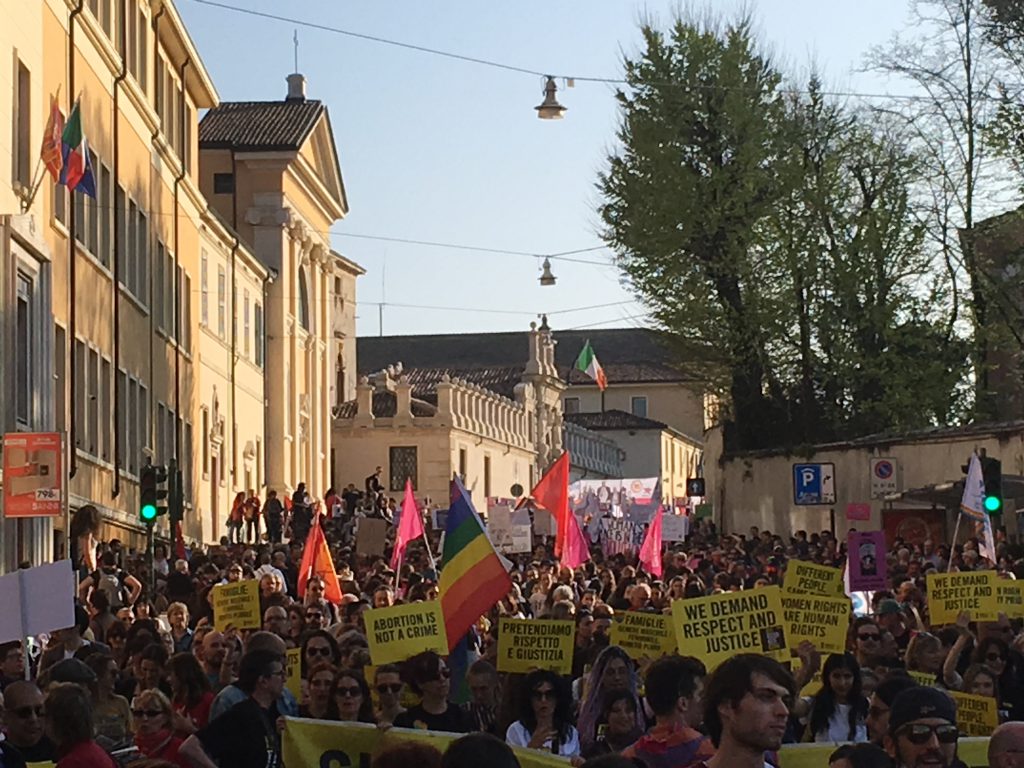 Now I’m already on the other side of the alps, having once again shown my ID despite Brennero marking an intra-Schengen border which should be open.

The passengers getting on and off the train in Innsbruck look very different from the crowd I was immersed in yesterday, and yet, since yesterday, sudden transformations seem more plausible than they did before.

We got the train to Verona with several of Aurélie’s colleagues. The atmosphere was already festive then. The neuro-scientist Carola, claiming to go to a demonstration for the first time in her life, jumped up and down in anticipation. We had met her and her husband for drinks the previous night, discussing  the basics of demo know-how and the university’s petition to re-open gender-education programs at Trentino schools.

“What was it called again?” asked Carola, giggling. “Book-soup? It sounded like book-soup in German!”. Aurelie spelled “Bezugsgruppe”, affinity group. The train was packed, so we stood at the doors, together with Aurelie’s student and her boyfriend. He started to teach Aurélie juggling, an exercise which then led to lively debates on the mathematical function depicting the curve of the balls’ changing positions in the air and the linguistic origin of the suffix “-are” as in “giocare”.

We arrived well before the assembly time. Our meet-up with Adriana, who’d spent the night in Verona, and Ele & Gianluca, who came up from Rome, worked out smoothly. The enormous space outside Verona station filled up rapidly. We sat in between a black LGBT-group, the Rationalist Union, and the Pastafaris. The sun shone brightly and I was in awe of NonUnaDiMeno’s powerful aesthetics. The black dress-code looked radical and assertive and brought out an explosive quality I never noticed in pink before. The matryoshka-icons invoked the collectivity within which every one is irreplaceable, and besides, they are an easy shape to cut out and carry as banners. Many people wore the T-shirt with a serious-looking girl, her fist raised and flaming, and some women held portable “flames” in their own hands, cut from pink cardboard.

In terms of the radicality of the slogans, only some communist party’s members were a match to NonUnaDiMeno. With their anoraks and small-print leaflets, they stood a bit forlorn in the midst of the vibrant encampment, but they seemed to try and rise to the occasion, not only by explaining that “the only thing against nature was capitalism”, but also by waving a banner that said “The only illuminated church is one on fire”. Elsewhere, there was parody and joy, too, if with a milder touch: “Famiglia naturale? No, frizzante!” (Natural Family? I prefer sparkling!) or “Vulva la revolution.”

Besides generic affirmations of freedom and love, strong and multifaceted claims for the right to abortion spanned from dramatic depictions and reclamations of ovaries to laconic A4 sheets stating “I can’t believe I’m still marching against the same shit after 50 years.”

Though some of it died pink and purple, there was a lot of gray hair at the demonstration. The quest for alternative intergenerational axes, which has occupied so much of Italian feminist writing, was embodied all around. I still get my particular childhood amazement at the sight of older feminists. This sudden sense that there might be a structure of power and support beyond the frail official bonds of women in family, school, and work. Women with wild hair and worn faces, women who refuse the compulsion to smile when expected to, women who don’t ever lower their eyes, which always makes me want to compare their gaze to lid-less birds of prey.

Many of the older protesters seemed happy – determined yet relaxed. Sometimes, they just paused at the side of the march and watched, perhaps thinking that their efforts hadn’t been entirely in vain. One raised a sign: “Beware. The witches are back.”

In the narrow streets of Verona, it was hard to get a feel for the size. I like to believe what NonUnaDiMeno tweeted: “We are the moon that moves the ocean. We were 100 000.”

Adriana had burst into tears of happiness, facing the energy of the assembly, feeling the contrast to the many miniature gatherings she frequents in Belgrade, and the resonance with all her political hopes. We found our way back to laughter. “You know what the two of us are called in the Croatian media today?” – “Exterminators of fetuses”. And we embarked on political speculation. “Isn’t at least one difference between the current tide of authoritarianism and European fascism in the 1930ies that this time, an organized feminist movement exists?” – “’From your mouth to god’s ear’ is what we say in Serbian.”

Right here, in the Lega’s territory, the lineage to older anti-fascism was palpable. Carola had mentioned that the partisan-associations had organized busses to Verona today. At some point in the demo, I stood next to an old man with a moustache and a checked shirt who played “Bella Ciao” on his trumpet. As I learned from Chiavola Birnbaum’s Feminism in Italy, the anti-fascist hymn was originally a female rice-workers song. This crowd sung along, too, and when we turned around a particularly shoddy corner, there was a tall woman who’d climbed the balcony of a catholic association, and danced to it. She wore a placard fixed with brown tape as her bra. It had some hashtag to do with Salvini written on it. She beamed in the noise of the crowd, her make-up perfect under the unrelenting sun. As she waved, vogued, and saluted, I thought that this transfeminist revolutionary moment even had its Marianne.

Later, though, I learned that the message, at first incomprehensible to me, was “Salvini non mollare”. “Salvini, don’t give up.” She was a Lega-supporter, she had already toured Italian talk shows in that function. I was stunned. And yet, in a weird way, I liked it that she, too, could dance at this revolution.

And dance she could.