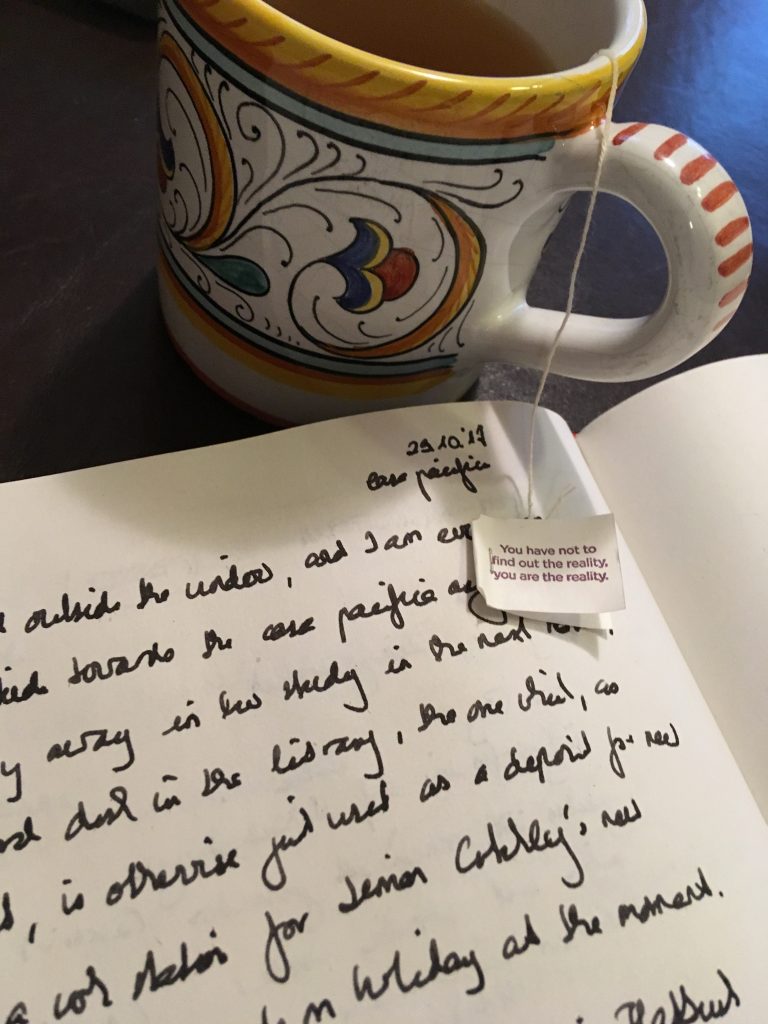 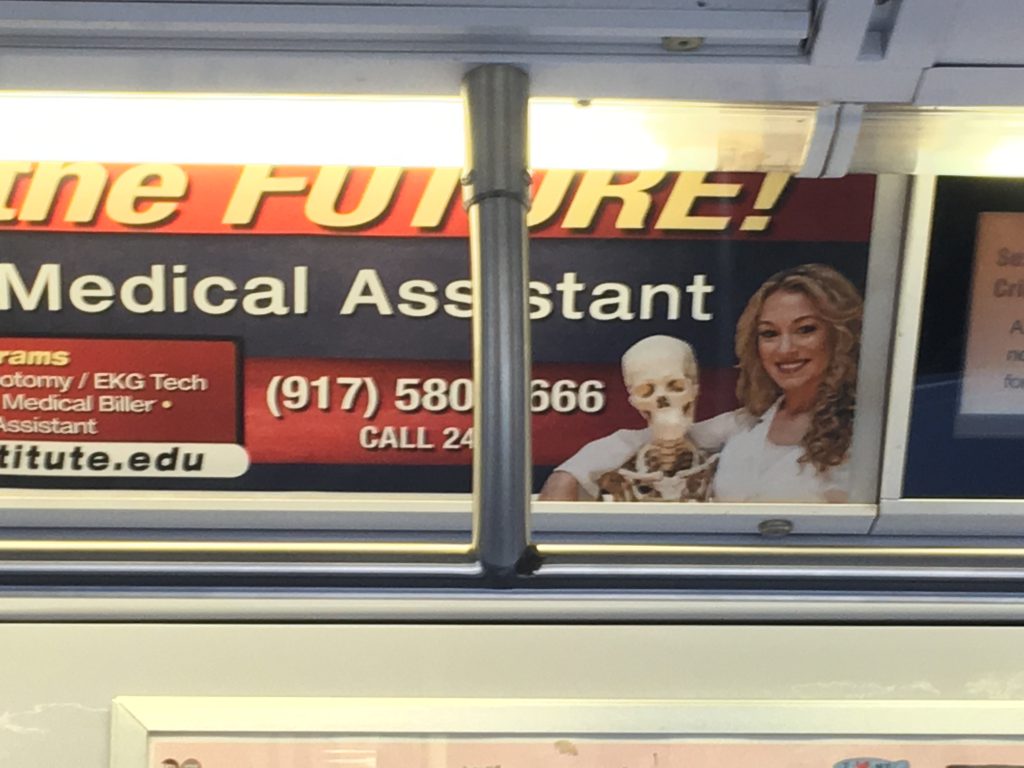 It’s raining like hell outside the window, and I am even more flooded with gratitude towards my Casa Pacifica asylum. Sabeth is typing away in her study in the next room. I’m at the central desk in the library, the one which, as Sabeth puts it, is otherwise just used as a deposit for new books.

I have canceled my visit to Hrishi’s studio in Flatbush and made myself some ginger tea. It is soothing after too much coffee and to much political input this morning. In fact, I actually felt sea-sick coming “home”, but have by now recovered enough to resist the tea-bag’s regressive message and write. “You have not to find out the reality, you are the reality.” Holy cow!

I left the house in good spirits, having genuinely enjoyed the conference at the New School and even more a long evening indulging in passionate socratic dialogue with Sabeth.

On the G train, which was pretty empty on such a rainy Sunday morning, two tired looking white men started arguing with a young woman. I hadn’t heard the exchange, but it must have been started by one of them making obscene comments, upon which she told him to shut up and leave her alone. The second guy got involved, and for a split-second I thought he would stop his mate, but no, he told the woman very angrily that she hadn’t been addressed and should stay quiet or else… Opposite us sat a straight hipster couple with a baby in a push chair. The guy made a grimace as if something was half funny and half painful for him in particular. So they were not to be counted on and nor was I.

I distracted myself by studying another absurdity. An advertisement for medical training that seemed more geared towards learning to kill than to cure.

The two guys kept talking aggressively amongst themselves; the young woman shook her face and fixed her gaze out of the window. Then an anorectic-looking lady entered with a broad smile on her face and said she wanted to share the gospel with us. For some reason the only formulation from her sermon that stuck with me was the phrase “The Lord will carry you by his hand”. It seemed such a bizarre yet perfect mix between a circus weight-lifter showing off – lifting someone with one arm and parading them about – and the sheepish hope that indeed, someone would always hold me by the hand. Maybe these days, even to survive a subway-ride, you need a shepherd-turned super-hero to carry you above the crowd.

The young woman and me got off at the same station (5th/9th). One of the guys also stood up, leaned out of the door and stared after her. With my rain-jacket’s hood pulled over and my back toward him, I started walking like I do when scared in dark parks: broad legs, swinging shoulders. As if that man who’d just seen me sit there awkwardly with my shiny necklace would now be tricked into thinking a 1,80m tall guy had come between him and his target.

In the passageway, the woman suddenly leaned her head against the subway map and started crying desperately. I asked if I could help, and she said no. Too right. I hadn’t.

Stomping through the rain to find the right café I fell into a familiar anti-New-York-rage. Why is everything broken? Why is everything ground down, sucked up, beaten; why is there no corner left treated other than as a resource to be exploited? Give me your flesh, give me your soul. Those worn-out men with thick accents and thick upper arms who tried to extract some gains from that young woman’s presence were probably just as depleted as me with my lack of courage and as all the million-dollar real estate assets around. Regarded as houses, those are all of them in utter disrepair.

I mean, people used to make it an allegory of the sadness of socialism that houses in the GDR and Poland were all gray. But those houses were gray because their owners actually bothered to carefully put concrete plaster up the walls to protect the bricks from the rain. Whereas here, even the facades done up for new boutiques are treated destructively: colourful rubber paint stuck over wet brick below leaking gutters. Finally, how is it possible that a Western metropolis doesn’t have the engineering skills to put cement tiles at a 4% angle so that even on rainy days, you actually walk on a pavement and not, like Jesus, on water?

Jay and Shirley had a good laugh when I reached that point of my rant. And then we started to talk politics properly.