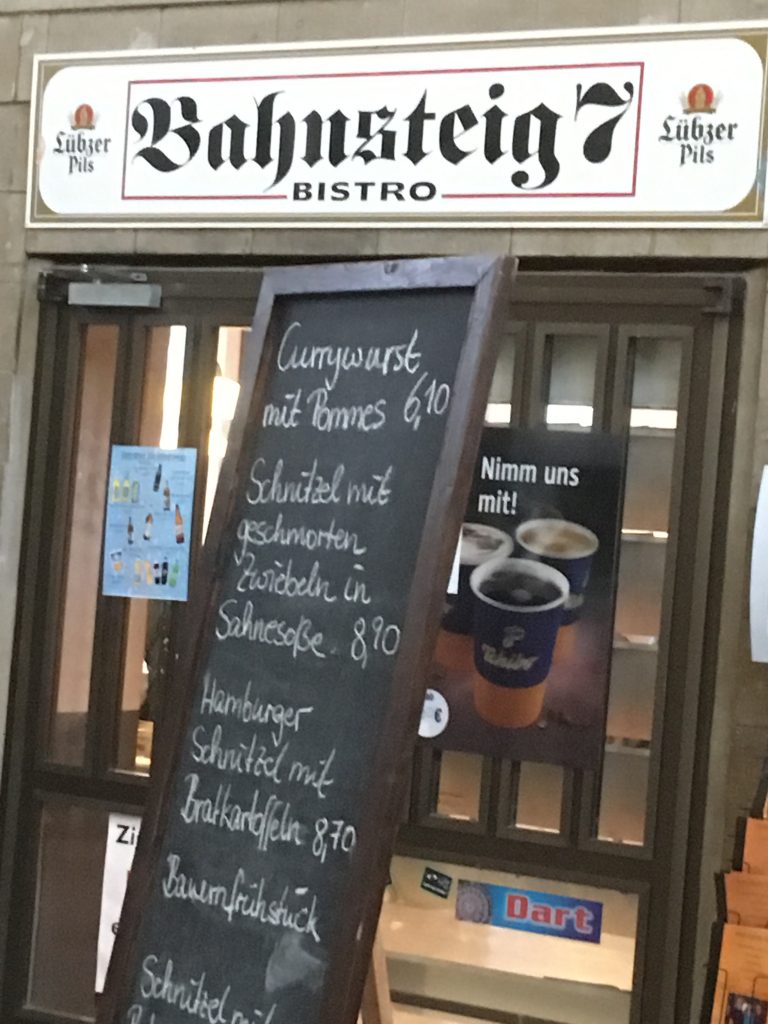 As I am typing this up, I sit stranded in the café at the train station in Plaulitz, our nearest town. I always call it “Schwelle 7”, but that is the name of a fetish club in Berlin. In fact it is called “Bahnsteig 7”. Normally I take a faster train to Berlin from another town, but as I explained to the taxi-driver this morning, our car is at the mechanic in the hope of getting one last MOT. “I know, your husband already told me when I drove him to the house the other night.” – “We aren’t married,” I said, satisfied with the perfect balance struck between truth and obfuscation.

The taxi in fact was a replacement bus service. I joked that this was the most comfortable “bus” I’d ever been on. But I know too well that our neighbour Sandy has moved to Plaulitz because she can’t afford the 1€ additional fare when going to town with her kids. The driver was friendly, and openly curious about when and why and with how many people we had acquired the derelict manor house. I often get this feeling that people actually are surprised and flattered that anyone moves to a region they themselves have accepted to see as abandoned, empty, superfluous. (I know. Anyone like me or like them.)

Judging me by my city-attire, the driver inquired whether there wasn’t too much renovation to do in the house. I restored our honor to the point of telling him that we even made our own fire wood.

My coffee and roll are a real treat. It has gotten very cold for November, and I had had to put the alarm very early this morning in order to dial up the bus-replacement 90min beforehand, so I am hungry. I also feel rewarded for having learned what to do around here about ordering coffee. I didn’t insist on Cappuccino or Macchiato from the dusty plastic machines which the locals themselves never use. So I am sipping a decent filter brew, which reminds me of horse-shows, funerals, and conferences. In fact, it is much better than what we serve at conferences.

I decided that I could do an entirely impromptu introductory lecture on the core concepts of Judith Butler’s work upon arrival in Berlin later, so I have gained time. I tethered my laptop to my phone network and read Al Jazeera and The New York Times on the Polish nationalists’ march. 60 000 is looping in my head, as if I wanted to add it up to achieve the according echo. I don’t click on the video. I know how devastated I was at the Charlottesville video and I already had my share of YouTube-induced weak knees this weekend.

Brazilian alt-right Christians burning an effigy of Judith Butler dressed up as a witch. And later waving their placards with gigantic photos of Butler either crossed out or decorated with satan’s insignia at Wendy Brown at the airport. (Did I mention I hate airports?) As humiliating as the witch with a pink bra strapped around her bulky straw body was, there was a bizarre simplicity to the placards. Guided by their phobic instincts, the protesters obviously considered the way Judith Butler naturally looks so monstrous that no further caricature was deemed necessary. So there she was, under the devil’s horns, looking down perfectly dignified, calm and beautiful onto a screaming gang of fanatics.

Are they a gang? Or are they the next mass movement? Ann objected more strongly than usual to what she perceived as an over-generalization on my part. No, this anti-genderism is not the nodal point for the new fascist mobilization. It’s one theme, but the anti-immigrant discourse and islamophobia is much more salient. I tried to explain that I wasn’t talking about the agenda, which clearly first and foremost is a racist and xenophobic one, but about the leverage point that mobilized people. The framing which allowed to actually pursue that agenda openly and aggressively and transform it into a political movement. They can make themselves believe that they would drive all those immigrants out if it wasn’t for those gender-studies-media-elite-femi-nazi-snowflake-liberal-pederasts who censor them and weaken them by destroying families and masculinity and who are out to mess with their children before replacing everyone with all those foreigners. Or so the story goes. But indeed, probably not the story. But one angle of it. And the Christian “god” no one even believes in any more is a perfect reference point against both: muslims and sinners.

On my way to the platform I saw a memorial poster. I expected it to discuss the deportations and started reading. It explained how in April ‘45, an ammunition train parked in the Plaulitz station was bombed. It exploded and erased the whole quarter of the city. In the station building, 121 people had been watching a cinema screening. The presenter had suggested to interrupt the film and go to the bunker when the sirens rang, but people insisted on watching on. Most of them couldn’t even be identified after their death because the bodies were so scorched.

Sometimes I think any peaceful encounter is a miracle given the layers of violence and trauma piled up behind and inside us. And maybe there is no single moment deserving the epitaph of peace. Just moments were some of us, due to bizarre protections and privileges, managed to uphold their outer integrity, like a white surface unscratched.

Later, already on the S-Bahn at Berlin’s outskirts, I noticed a Poster designed by the biggest German environmental agency. It stood on some wasteland at the side of the track. Across the photographed facade of a dirty grey tenement was written “Statt Beton und Schmutz: Umweltschutz” (“Instead of cement and dirt: environmental protection!”) A the bottom, some over-sized blades of grass, painted in green.

I am all in favour of the environment, though I think we have long moved into an era where we’d need to do much more than mere “protection”. But it seemed utterly bizarre to campaign for the environment against an image of the home of poor people. A tall drunken guy entered and slumped down on the seat in front of me. From underneath his hoodie he blinked at the poster. “Umweltschutz?! Schützt Euch doch selber, Alter!” (“Protect the environment?! Rather protect yourselves, losers.”)