A Range of Rhythms | travel writing 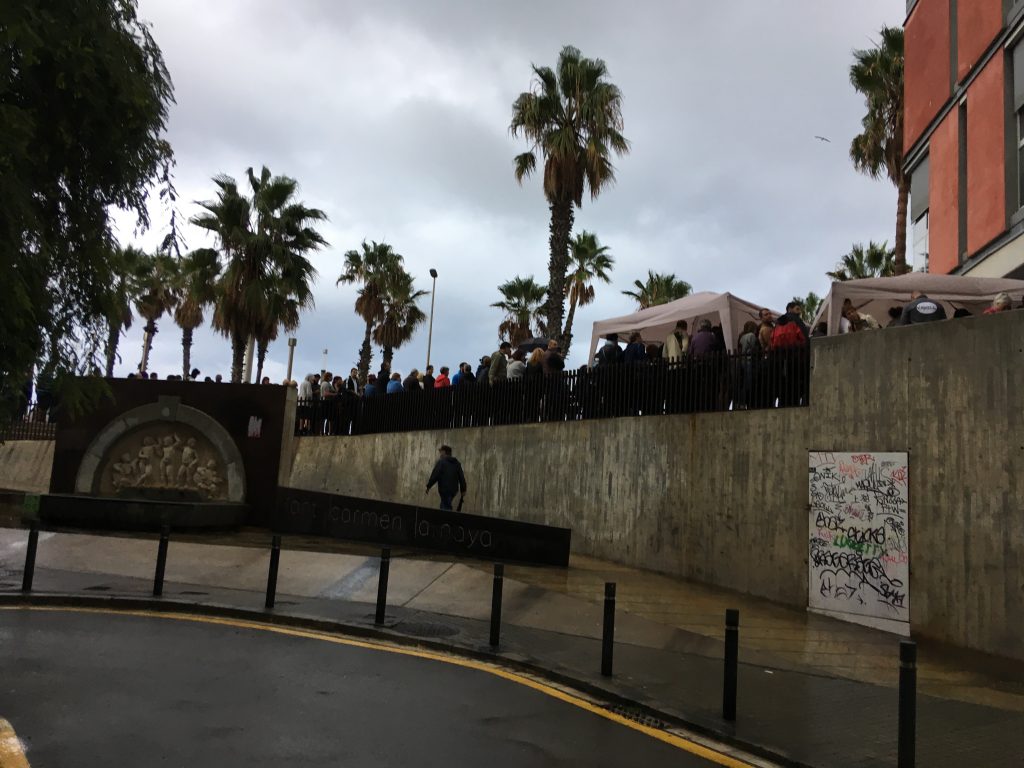 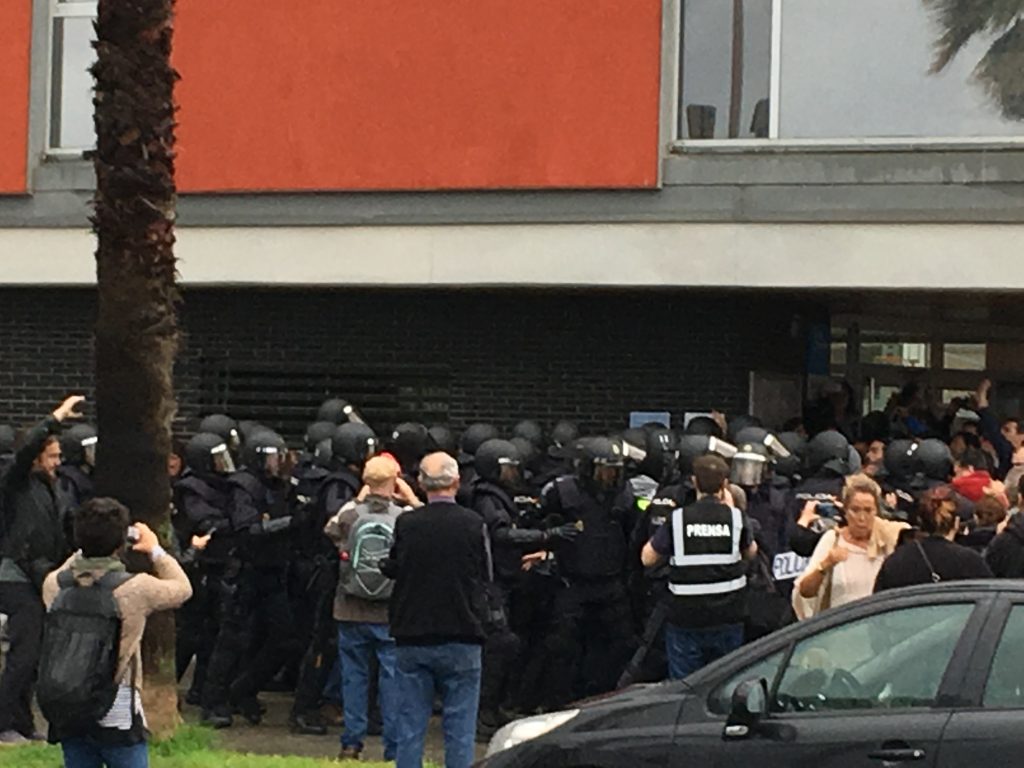 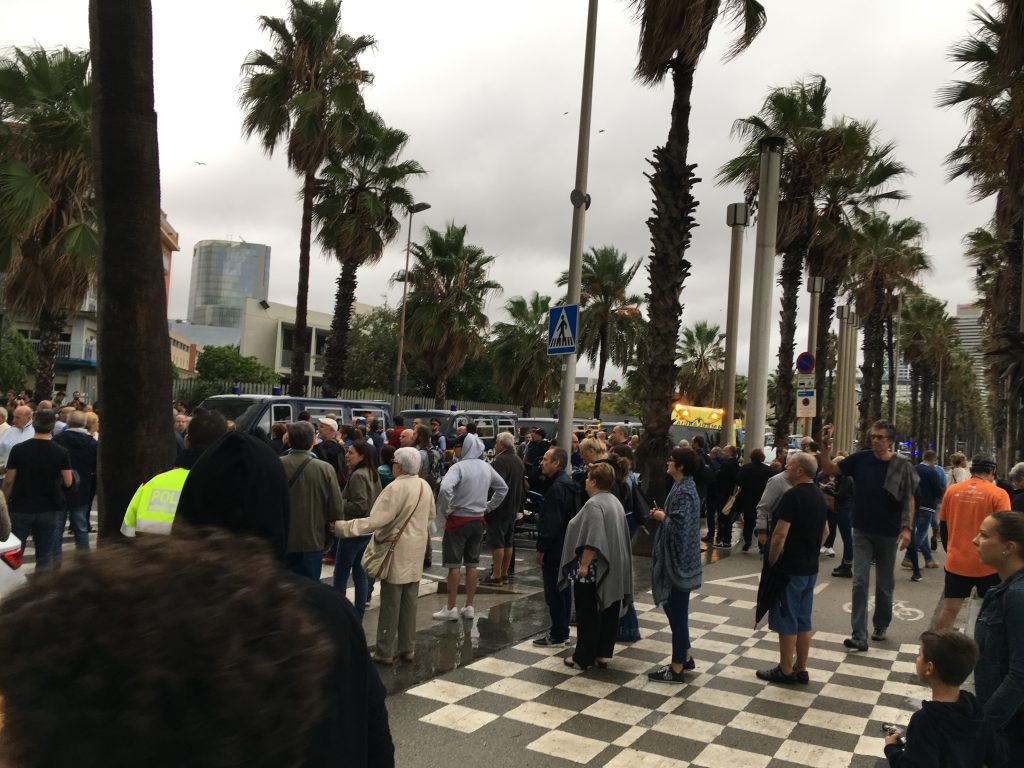 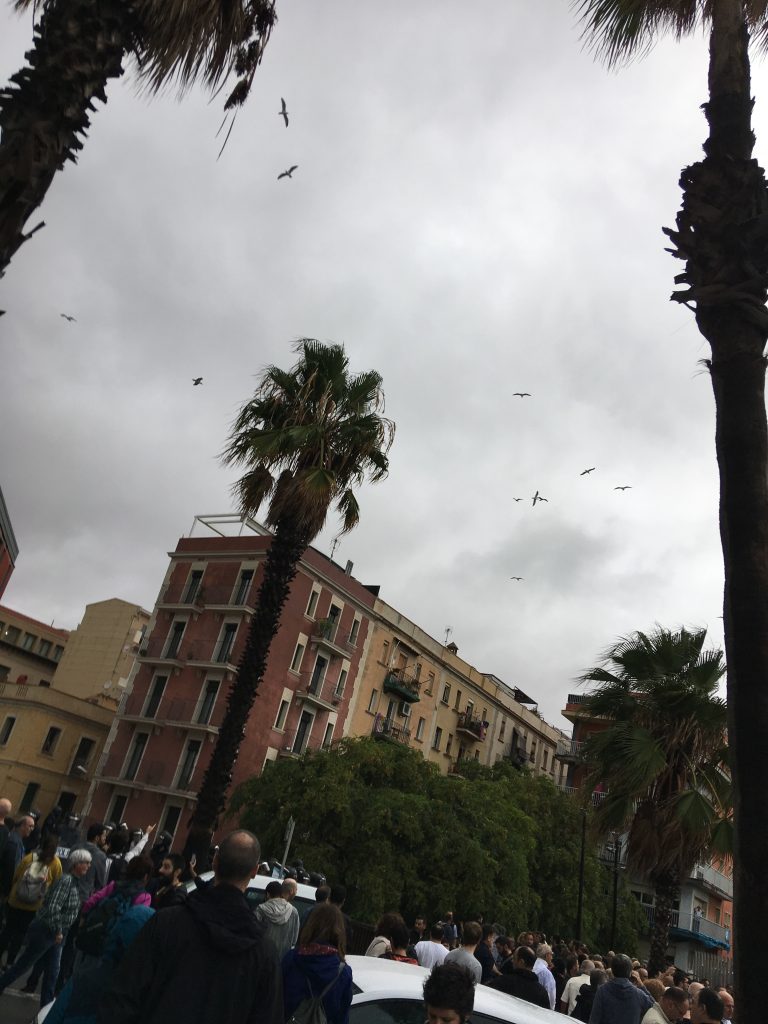 It’s quieter again, much quieter than it was all summer, early in the morning outside the window in the narrow street. Aurélie’s favourite seagull had come and performed her cries, now it is just the occasional rattling of a shutter and a delivery van.

Yesterday at dawn, we were woken by chants. The rhythm was like the German “Zu-ga-be” which one shouts after a concert to ask for encores. But the word was “vo-ta-rem” – we will vote. It echoed up the steep facades of the houses two hours before the doors to the ballot station were supposed to open.

Aurélie and me were wide awake, electrified by insertion into a circuit we neither set up nor entirely understood for the moment. We decided to skip the pre-breakfast tea and pulled trousers over our boxer shorts.

The school is just down the street, a modern, flat-roofed building wedged into the balustrade erected orthogonally at the end of all the tiny Barceloneta side streets. The balustrade carries the broad promenade. It’s where the older city meets its Olympic makeover. Against the gray sky, people queued alongside the banister at the side of the promenade. In between the huge palm trees which line the road, their silhouettes seemed very small. We went across to the other side of the street and stood on the wide pavement frequented by joggers and dog walkers. Behind us lay the beach, in unusually unfriendly weather. The sea like aluminium foil, to the right the glassy hotel-tower. Several container ships sat perched on the line of the horizon. We wondered where those ominous cruise ship full of Spanish police might be anchored.

The queue wasn’t long, but grew steadily. People in plain clothes, some equipped with umbrellas. A fair proportion of them elderly, not the typical hipsterified and youthful version of public space, and not the concentration of weathered activists one would expect around acts of civil disobedience. But there were some younger couples, a few people who did look explicitly leftist, a punk woman with her mother. Only a handful of people of colour, several lesbian couples in matching outdoor jackets. Maybe 200 people in total.

With us on the opposite side of the road stood four Catalan police. They huddled together just like the aspiring voters. One man in black clothes had come on a bike. He leaned against the rail, his arms crossed above a massive belly. He fixated the queue with a somewhat sinister determination. I imagined him to be a disapproving Spanish nationalist, but that might well be pure fantasy.

“It’s very polite of them to stand in line”, Aurélie said, “but maybe they’d be safer if they moved closer together in front of the door.” The doors were supposed to open at 9am. One minute before that, about ten dark blue police vans stopped further down the road. A formation of about 50 Spanish police marched toward the school. They were clad in riot gear, including grotesque, trumpet-like rubber-bullet guns. The people at the front of the queue waved their hands for the others to move closer. A bit over half of them stepped up and formed a group in front of the door, the rest stood back and looked as confused as we probably did.

The police pushed their way into the small crowd towards the door of the building. They immediately started wielding their batons, pushed people over, hit them. None of the usual stand-off, no announcements, no warning. Umbrellas flew out of the crowd. I started screaming rather hysterically at one point, because I had seen a baton come down three times at absolute full speed. Clear case of only seeing a boundary from beyond it. I wouldn’t have known what a visual difference this is. Even in the worst stables I worked, let alone the worst demos I was at, I have never seen a creature beaten with absolutely full and unrestrained force. I now know I hadn’t.

The whole thing didn’t last long. 20 minutes at most. Many people left quickly. The first person I saw bleeding wore a bicycle helmet, but the others seemed not at all to have expected that aggression. Quite a lot of people running out of the throng were crying, several of them turning to the Catalan police for help, including an elderly man with a bleeding nose. An ambulance came. One of the pictures gone viral on Twitter, of the blood-covered young man with the torn white T-shirt, was taken at our site. I recognized not only the building, but also the female Catalan police officer holding the injured man up. I saw the woman when things started to calm down. She was totally in tears, gesticulating wildly. She addressed one of her older colleagues who remained very calm but seemed to listen to her very seriously. She then stood with the relatives next to the ambulance.

Shortly after the Spanish police had dispersed the crowd and formed a cordon around the building, the road suddenly filled with police vans again. They must have gone around the block. They stopped, like a dark curtain between us and the violent scene, and then drove off again, taking all the cops with them. No one had been arrested. The whole thing very obviously was about something other than law-enforcement. More like fear-infusion.

The remaining people seemed really confused, everyone shook their heads. Many clung to each other and looked around in disbelief. Someone started applaud to the Catalan police. Or to themselves or their pacifism. People joined in.

Someone else opened the door to the building. I couldn’t tell whether the Spanish unit had even confiscated the ballot boxes. People poured into the building. We went home to have tea.